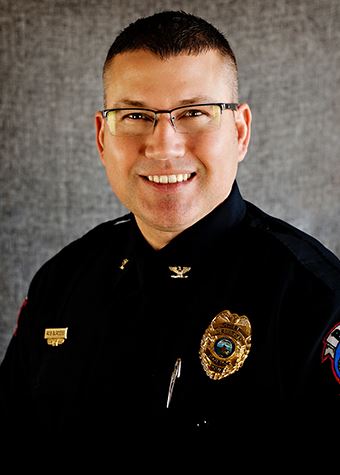 Chief of Police Rob Burdess was appointed to the position of Newton Police Chief in September of 2015. He started his career with the University of Iowa Police Department from 1997-1999 and was hired as a police officer in Newton in 1999. Chief Burdess served as a patrol officer, Detective and Lieutenant in charge of a patrol shift. He also worked as the DARE coordinator, commander of the SWAT team, traffic safety coordinator, field training officer, defensive tactics and impact weapons instructor, international police bloodhound handler/instructor and served as president of the Newton Police Association. Chief Burdess currently serves as President of the Iowa Police Chiefs Association and previously served as President and Executive Board Member of the Iowa State Police Association and Rabiner Treatment Center.

Chief Burdess holds an AS Degree in Criminal Justice from DMACC, a Bachelors in Public Administration Degree from Upper Iowa University, a Master’s of Public Administration Degree from Walden University and is a graduate of the 373rd class of the Northwestern University School of Police Staff and Command. He is recipient of the International Association of Chiefs of Police 40 Under 40 Leadership Award, the FBI-LEEDA Trilogy Award, the Iowa Law Enforcement Academy 5 Star Leadership Award and the Newton Daily News 20 Under 40 Award.